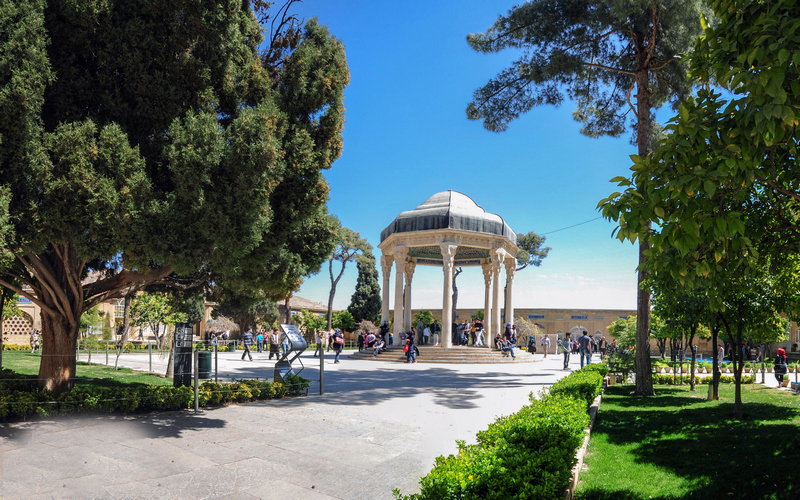 A Pilgrimage for Poetry: My Trip in Shiraz, Iran

Written by Apochi Guest
Share this article
FacebookTwitterEmailGoogle+LinkedIn
Home » A Pilgrimage for Poetry: My Trip in Shiraz, Iran

Don’t forget to visit Sa’adi’s tomb. His poems are truly humanist and his works are highly respected around the world,” said the passenger sitting next to me on my flight to Shiraz, Iran.
I could not forget — the express purpose of my trip to the “city of roses and nightingales” was to pay my respects to both Sa’adi and Hafez, the renowned Sufi poets of Shiraz. As a lifelong home of the two poets, the capital of the Fars province is also considered the capital of Persian art, culture, and literature. The 1.7-million-strong city is further famous for its beautiful gardens featuring Persian architecture. Two such gardens house the tombs of Hafez and Saadi. Little is known about the life Hafez, born Shamseddin Mohammad in 1325, though he was greatly legalized following his death in 1389.
A popular and plausible anecdote is that he memorized Al-Quran after hearing his father recite passages, providing the name he is better known by: “Hafez.”
The word means guardian and is attributed to individuals who learn the holy book by heart. Hafez was a master of the ghazal or Persian ode. He became a court poet for several rulers and founded the Shirazi literary school. “Divan of Hafez” is a compilation of Hafez’s collected ghazal.

The peaceful and pleasant gardens housing the tombs of Hafez and Sa’adi draw tourists from all over to the world to Shiraz.

love, spirituality, and hypocrisy – themes which he made relatable to every reader, preserving his relevance over the centuries.
“Most Iranians have Divan of Hafez at home — it is like Al-Quran for us. We read it during Nowruz [Persian New Year],” said Mitra, a young woman of Shiraz. Mitra’s love for her hometown poet is clearly shared by the rest of the country, which celebrates Oct. 12 as Hafez Day. Though Hafez’s works were inspired
by Islam and are cherished throughout the Muslim world, people of every culture and creed hold him in high regard.
The philologist William Jones brought the works of Hafez to a larger audience in 1771 with the first English translation, and Johann Wolfgang von Goethe, Ralph Waldo Emerson and Henry David Thoreau count the Sufi poet among their influences.

The tomb of Hafez is clearly a great Shiraz must-see, but as instructed, I did not forget to visit Saadi’s tomb in northeast Shiraz. Saadi’s mausoleum is situated in a large, lovely garden. The marble tomb, dating back to the 1860s, is inside of an octagonal Persian building with tall columns and an aquamarine dome.

was impressed by how sincerely the Shirazi people revere their poets. In the thoughts and hands of great poets, words become immense, momentous, and even magical. As a city devoted to its poetry, Shiraz is a testament to that statement. Read more…