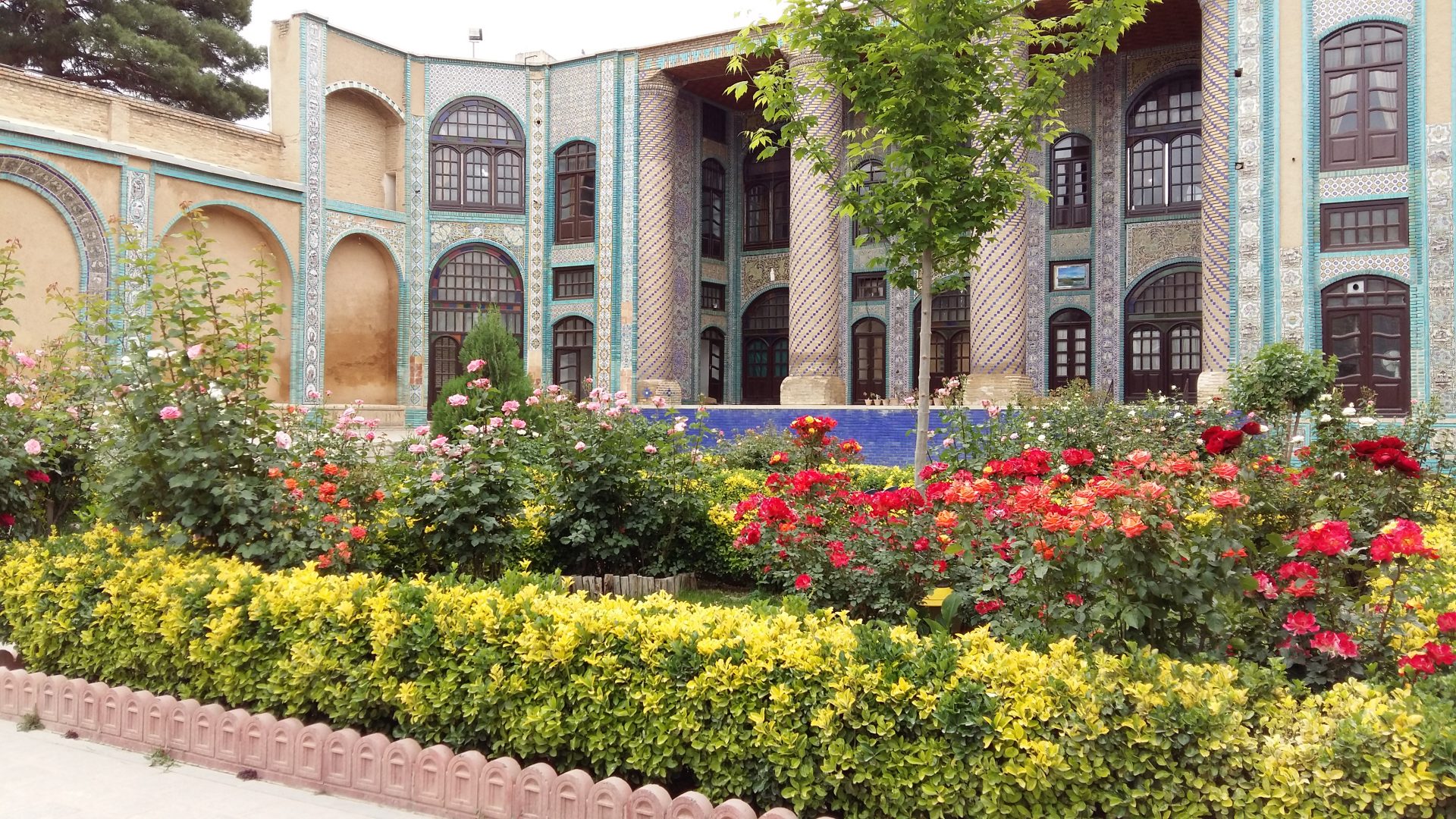 This building was built by Hassan Moeini, nicknamed Moaven-Ol-Molk. The original building of Tekie Moaven-Ol-Molk built during the Qajar dynasty and at first, it was just the small part, which was called Hosseinieh.Tekie Moaven-Ol-Molk was used to hold religious ceremonies and resolve ethnic and tribal disputes & It has been a school of Islamic sciences for 30 years. At a certain point in time, the disputes arose & the building was shot and some part of the building was destroyed. After that, the owner of, rebuilt the magnificent building and also bought the surrounding buildings to expand the building. It makes it the largest tekie in Iran, which is consist of three parts: Hosseinieh, Abbasiyeh, and Zeinabia.

Tekie Moaven-Ol-Molk is famous for its beautiful miniatures tiles and in the connection between architecture and famous tiles. The tiles are made in two types of embossed tiles and seven-color tiles. The architect of this building was Asghar Memarbashi.

The first part of this building is called Hosseinieh & is older than the rest of the building with a very suitable entrance. you have to go down seventeen steps to enter Hussainiya because is about 6 meters below ground level. there is a Saqqakhana (it is a small religious place where people light candles) in Hosseinieh The middle part of tekie, called Zeinabia, is 2 story space surrounded by several chambers. This area is covered with a dome-shaped roof. The upstairs space has been the space for the women attending the religious ceremony.

In Zeinabia section, beautiful tiles can be seen in 10 images of the tragic scenes of Ashura in Karbala, which is one of the most important events of the Shia religious and in the stem of the dome, can be seen 8 other images in tiles of Religious’ story that are written in Qur’an, the religious book of Muslims. Also, the grave of the founder of this building, Moaven-Ol-Molk, is located in this part of tekie.

The third & last part of tekie, called Abbasiyah. Abbasiyah section is the largest and most beautiful part of Takie, which includes a large yard & pleasant terrace with two large and tall brick columns. In this part of this building, there are an anthropological museum and a museum of customs and ornaments. On one of the tiles in the Abbasiyah section, you can see the footprint. People believe that this footprint belonged to Imam Reza (AS), the 8th Imam of the Shia, but in fact, this tile is simulated from the footsteps of Imam Reza (AS) in the garden in Neishabour. In ancient times, because of the sanctity and importance of this place, people who had quarrels and disputes with each other made peace and reconciliation near this stone. There is a high half-column in Abbasiyah section, the founder of this building intends to install a clock on top of it that reached Iran after his death and will never be installed.

In the section of Hosseinieh and Abbasiyeh, there are different tiles of the kings of the Qajar dynasty and some pictures of famous religious people, pictures of the kings of Shahnameh (the book of one of the greatest persian poet called Ferdowsi) and some pictures of landscapes that painted inspire of ancient cart postal. In addition to the beautiful pictures that have been painted in the tiles, different poems of different poets with Nastaliq calligraphy have been engraved on the tiles. Tekie Moaven-Ol-Molk had three entrances, but nowadays, visitors can enter and exit from the main door that is located in the main street.

Where to eat near the Tekie Moaven-Ol-Molk

There are many shops for buying souvenirs near Tekie Moaven-Ol-Molk, and near the traditional Bazar. Near Takie and next to the Bazar, there is an old house called Soori’s house that has recently become a traditional restaurant, that you can not only use the Soori’s House restaurant to eat traditional Kermanshahi food but also enjoy the historical house & take a picture with local customs only in the night.

Where to stay near Tekie Moaven-Ol-Molk

There are small inns near Tekie Moaven-Ol-Molk, which are located near the traditional bazaar at a very cheap price. But the closest hotel to Tekie is the 4-star Parsian Hotel, Jamshid Hotel, and Sina Hotel. And the only Kermanshah’s hostel, the Oak hostel, is located in the historical context of Kermanshah and near this Tekie.

The best time to visit Tekie Moaven-Ol-Molk is spring. Due to its beautiful courtyard and garden in April and May. When Tekie’s yard is full of colorful flowers, it is the best time to take pictures with local customs.

Other tourist attraction near by Tekie Moaven-Ol-Molk

The location of Tekie Moaven-Ol-Molk

Tekie Moaven-Ol-Molk is located in the central part of the historical context of Kermanshah, near the traditional Bazar, in the street called Hadad Adel (Modarres) in Kermanshah.

How to get to Tekie Moaven-Ol-Molk

To reach Tekie, you can use public transportation such as buses or taxis.

By bus: Next to tekie, there is a bus stop, Se Rahe Navab in Hadad Adel (Modarres ) street.